So over the years I have mostly used X10 for my home automation hardware. I used it because it was pretty much the cheapest solution out there. The hardware worked, but it had it's problems and limitations. So last year when my Raspberry Pi had died that I had running a PERL based automation software called MisterHouse, I wanted to explore other solutions. I ended up stumbling on the MySensors website. MySensors is an open source DIY home automation hardware platform that works with a good number of automation controller softwares, many of which are open source themselves. 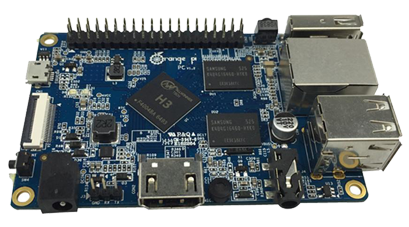 I started with a software called Domoticz and had it running on a new kind of development board that I picked up cheap ($18 US). The board is the Orange Pi PC.  The board is roughly the same size as a Raspberry Pi and it runs a similar version of embedded linux.   All I needed to do to get started with MySensors was to build a gateway node that  would talk to the sensors.  There were a few different options for communications hardware.

I ended up choosing the nRF24L01+ radio boards.  The main reason was because hey were wireless which meant that I could put sensors in places that before were near impossible.  But they were also cheap.  I was hooked.  I could build whatever sensors I wanted, and there were plenty of examples to get me started.  My goal was to completely replace my old X10 hardware and upgrade it to MySensors as much as possible.  I started with a node for controlling and monitoring my garage door opener.  From there I was hooked.  I wanted to MySensorize everything.  So it continued.

So after using Domoticz for a while, I ended up finding a few limitations.  Being a member of the MySensors forum for a while, I decided to do some searching.  I noticed that a few of the people on the site were using a platform called Vera.  Vera is a hardware device type of automation controller and it has a plugin architecture that can support many different types of hardware, one of them being MySensors.  I ended up requesting and getting a Vera Plus controller as a gift.  It is a great platform and is very customizable with LUA scripting.   The plugins for it are pretty much all built with LUA script.  I have yet to find a problem I can't solve with it.

I currently have 40 plus home automation nodes and it keeps growing.  From MySensors nodes to WiFi controlled relays to my Amazon Echo and more, my system continues to grow.  I am always looking for new ways to automate my life.  I don't think I will ever stop.

I encourage you to go out and automate your life.  It is a lot of fun.  Check back to see other posts from me about my journey through my automated life.

A bit of work and research goes into all of the content posted on this site.  If information from this site helps, consider making a donation to the cause.  You can use the donation link posted below.  Donations are completely optional. Even small amounts will help. Thanks for viewing.

Donate To Me
PayPal: paypal.me/DanBemowski

Check out my hot topics

My name is Dan Bemowski, and this is my new WordPress website started on June 11th 2017

Translate this site to your language